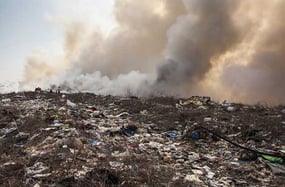 Another Earth Day come and gone last week reminds us of a common question from our daily lives: Paper or Plastic? and some people are beginning to weigh sustainability against convenience.

The common thought is that paper, being a renewable resource and biodegradable must be the correct choice. Whole Foods even eliminated use of plastic bags in their stores, and Oakland and San Francisco have both restricted or banned their distribution. But what is the real cost?

The Case Against Plastic

Plastic bags are common as roadside trash; their lightweight structure makes them take off with the slightest breeze. They are incredibly damaging to wildlife, especially marine animals. Wildlife mistakenly eats plastic and subsequently starves, or gets caught and entangled and can suffocate. It’s a pretty visceral image.

Plastics are also notorious for taking a long time to decompose in landfills. Plastic, being a relatively modern invention, is not fully understood for just how long it will stick around.

The Case Against Paper

Paper, surprisingly, does not do as well as you may think. That renewable resource of trees cut down to produce those bags could be better used to absorb the CO2 produced by manufacturing, as it takes four times the energy to produce a paper bag versus a plastic one, and results in habitat loss for animals. It even takes more energy to recycle a pound of paper than a pound of plastic. The EPA has also stated that, within a landfill, paper doesn’t degrade significantly faster than plastic. 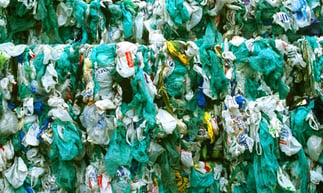 Plastic Inches Out Ahead

Despite the bad rap, plastic is less expensive for grocers to use, recycling it costs 2/3 the energy of producing a new bag, creates fewer airborne emissions and water pollution than producing paper, and makes less solid waste. Also it has more convenient secondary uses, from trash can liners to cleaning up dog waste. All things considered, the fact that paper bags can hold more doesn’t seem like all it’s cracked up to be.

Or how about passing up the question entirely? In 2008 Whole Foods stopped offering plastic bags in their store after a successful “trial run” brought about by a San Francisco ban on plastic bags. Chicago also enacted a partial ban, which drove other large retailers like Target and Walmart to offer reusable plastic bags that are at least 2.25 mils thick, have handles and can carry 22 lbs for at least 125 uses. Other stores offer 5-10 cent incentives for customers to bring back bags to the store to be used again, if done, it is an effective way for retailers to absorb the cost of having to provide the nicer bags the first time.

If your store is making a switch back to paper, or encouraging people to purchase reusable shopping bags,           Pan-Oston has a solution for your needs.

Reddy
Vantage
Ergolane
Made to Order